When Nicolas walked into the chapel the day of our video shoot, I was impressed at how he carried himself and how he looked me in the eyes as we talked. I knew enough of his story to know he had a really rough childhood, so I started with asking him questions about Canyon State Academy and what he loves about being there. He lit up as he shared about his passion for horses and becoming a barber. 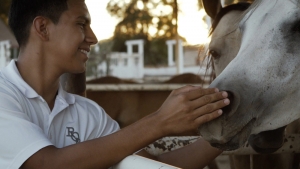 As the conversation flowed, my heart grew for this boy in front of me. We began talking about his siblings, about his mother who abandoned him for drugs, about his absent father and the abusive stepfathers he has had throughout his life. Several times I was nearly overcome by emotion, and I was so engaged in our conversation I sometimes forgot anyone else was in the room. In our time together, my heart ached for this boy who has seen so much and has been through so much in his short time on earth.

And then Nicolas shared about attending Sun Valley Community Church and learning about the love of God. He talked about attending camp and letting go of everything from his past. He said he is completely different than he was a year ago, and now has big dreams for his future.

Driving home from that video shoot, I could only sit in awe of the incredible story we had just captured and I felt a burden to tell his story really well. 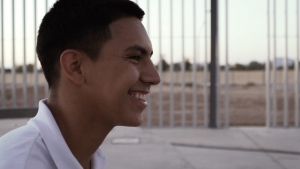 This past weekend, Sun Valley Community Church shared Nicolas’ story during services at their 4 locations and online. I was privileged to watch it live at their East Mesa Campus, and was humbled as several staff members thanked us for the video and shared how powerful it was.

It’s one thing to produce a video – but it’s something else to capture a story that affects people at their core and creates an emotional response.

We approached Nicolas’ story as we do any story: by genuinely caring. I made a commitment to myself the day of the shoot to be present with every question; to genuinely listen to Nicolas as he shared from his heart, and to honor him by sharing from my heart too. I focused on the heart of his story, his life change, and made sure everything in the video helped the audience feel the power of that change.

I’m grateful our partnership with SVCC allowed us to get to know such a remarkable young man. At 15, Nicolas’ story has already affected thousands – and I know he will influence many more in the future.